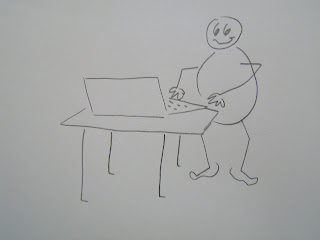 The choice for my mini conf event/activity was an asynchronous activity in Voicethread. I was excited to use this new tool and believed that others would be keen to try it out also. This was not the case, I did not generate as much interest in using Voicethread as I had expected. My inspiration for using Voicethread came from a previous mini-conf activity 'Managing multimembership in online networks'. This is a great example of how a Voicethread can facilitate sharing.

I trialed an initial Voicethread (Vt) with the topic of 'The highs and lows of online learning' (Vt 1) to encourage participants to share their spectrum of emotions that they experienced during FO2010 or in their online learning journey in general. This activity was posted on Voicethread 22nd October. I sent a group email to FO2010 google group list titled 'Want to have a bit of fun with Voicethreads?' and an offer to contact me on my blog if they had any problems. I received a comment from Carole to advise that I needed to make my Vt public to allow access by all which was easy to fix, I then sent an email to confirm all was accessible if anyone had encountered any issues. I also posted a blogpost on which I kept a running commentary on the discussion. I had participation from Sarah, Coach Carole, Jane and Karen H over the following month. In an attempt to encourage further participation on the final day of the mini-conference I sent another email to the FO2010 google group however there was no further participation.

I have written up a summary of the conversation that developed on The highs and lows of online learning Voicethread which served as a backup plan if there were any problems with Vt, I have saved this on Google docs....
If you would like to hear more click here and you may even decide to add your own comment.

The second Voicethread Vt 2 which I created was to encourage participants to think about how they could use Vt, appropriately titled 'How can you use Voicethread?'. This Vt was not promoted via email simply on the Mini-conf wiki page. Participation in this was limited to Sarah who was very enthusiastic about Voicethread and again posed the question of how Vt could carry on the conversation.

What went well?
Vt #1 - I was really happy with the responses from participants re:my simple pen drawings that made up the series of slides/visuals. I believe these simple sketches gave the Voicethread a personal touch.
Vt #2 - this Vt gave me an opportunity to create the individual slides (as per Carole's recommendation) and load them into the sequence of slides. I also created a Screenr on how to create a Vt, which was a great opportunity to learn how to use Screenr.

What did not go so well
Vt #1 - On considering the number of comments I was initially dissapointed however considering that there were 5 participants with honest comments and responses I feel happy with the outcome.
Vt #2 - There was no participation other than Sarah (who I have been able to count on through the course for her support and encouragement. ) Thanks again Sarah! which I can only assume was a result of lack of promotion.

How the event was organised and promoted
Email was the primary method of communication/promotion for the first Vt with the course Wiki having all the relevant details to access both Voicethreads. There may have been some confusion about accessing Vt however I received no questions via my blog re:access.
I was conscious that I did not want to overload my fellow students with too many emails but I think, with the benefit of hindsight, that I did not do enough promotion and I should have used my new found friend Twitter.

What I have learned about Voicethread?
Audio comments can be recorded while scrolling through the slides. Load slides individually to ensure your ability to change the sequence of the slides in future. Not everyone shares my enthusiasm for Vt, but I still think it is great.
Posted by McLean family at 7:58 PM

Email ThisBlogThis!Share to TwitterShare to FacebookShare to Pinterest
Labels: Voicethread

McLean family
We live in Wamberal (NSW Central Coast, 1 hour north of Sydney). We are traveling around Australia for 3 months from July to October 2012.